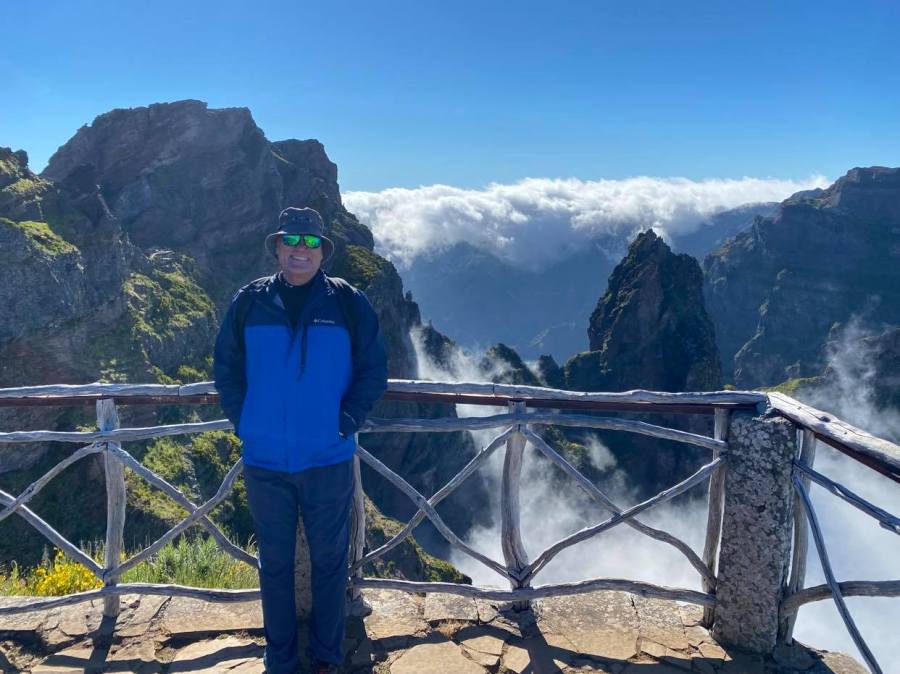 Madeira Island is stunningly beautiful! And, twelve days is simply not enough time to see and appreciate all of it. Luckily for me, I have friends that live there and were able to help me construct an itinerary for exactly the things that I wanted to do and the things I wanted to see. In last weeks video of Madeira, you caught a high level glimpse of some of the many things that were high on my list. Angels Waterfall (Cascata dos Anjos) is one of the most popular photographed spot on the island. Boat trips are available for dolphin and whale watching. There are multiple aerial cable cars available to transport you to various mirodouros (viewpoints) with unbelievable panoramic views. The indigenous food is incredible and there are over a hundred walks and hikes available to trek across the island. However, I knew that I wanted to do the Pico do Arieiro to Pico Ruivo hike as it is the 6th highest ranked hike in all of Europe in terms of difficulty and in unbelievable beauty.

I began my training for this particular hike over 6 weeks ago here in Lisbon by climbing the Elevador da Bica hill 10 – 15 times repetitively everyday. I would later find that this training payed off as it helped me make a critical decision at the turnaround part of the hike.

My friends Derek and Maria-Renee told me that we had to wait for the ideal day for this particular hike because everything depended on the weather. We switched our scheduled hike date twice because it would have been too cloudy and windy at the peaks and visibility would have been terrible. But then, it was on for Saturday, June 19th; the weather was supposed to start out cloudy but it would supposedly clear by mid afternoon. That was perfect for us. Derek and Maria-Renee picked me up at 7:00am along with their friends Craig and Mandy who also live on the island. The car ride up to the parking lot of Arieiro was not promising as all we saw were clouds and wind howling through our windows. Well, we kept our fingers crossed.

We were one of the few people there at 7:30am upon our arrival as the parking lot is normally packed with eager folks waiting to start this phenomenal hike. We were very happy that there weren’t many people there at that hour and we stepped foot for the very first time at 8:00am.

Some of the most phenomenal hiking and truly epic views are to be had in the first 90 minutes of the hike after starting from Arieiro. Normally. However, it was discouraging that we were totally covered by the clouds along the outset and through the peaks that we only had about 30 feet of visibility. And actually, that was just fine, because some of the highest ledges with 3000 foot steep drop offs on both sides were cloud covered and made it less frightening! The dramatic staircases are wrapped steeply along this ridgeline and are not for the feint of heart! We had no idea the weather would be so different (and beautiful) on the trek back!

We continued the hike and it became apparent that this was indeed going to be an extremely hard yet stunning hike. There was so much climbing of stairs and rocks, up and down, and up and down. Sometimes, completely vertical as you’ll see in the video. Even though it was cloudy, we were still able to see so many beautiful colors of the flowers and vegetation along the hike. The entire roundtrip hike is just under 7 miles long but the trek to the just the halfway point, Pico Ruivo, seemed like it was even much further than that, lol! We did so much climbing and descending, up and down, and up and down. It was really taking its toll on my left knee.

Finally, we got to the top of Pico Ruivo, the halfway point! We ate our packed lunch of Portuguese cheese, salami and bread. You can see in the video that there was complete cloud cover, 360 degrees, around the viewpoint at the top. It looked like the weather was still not going to cooperate. And, I had a huge decision to make. There was a parking lot at the top of Ruvio where I could quit the hike and just get a taxi back to the starting point and wait for my friends. My knee was hurting and the clouds were out, so I wasn’t sure what to do. When it was time to go after finishing lunch, my friends asked me what I was going to do. For a brief, split second I thought about just quitting but something inside told me to press on. I came here for this hike and I was determined to finish!!

We started to hike back and unbelievably, within the first 20 minutes, the clouds started to lift and the most spectacular views started to present themselves to us! It was so amazing, magnificent, beautiful, use all the adjectives you want, but the only way to describe it, is it’s indescribable!! Seriously! I told my friends that I would have kicked myself if I quit at the halfway point.

As you continue along the ‘bridge-ridge’ it’s quite a fun bit of trail because it has literally been carved out of the mountain. If you are any taller than 6ft you will have to watch your head because the trail is almost like a bit of a cave with railing on your left and the cliff wall almost swallowing you on the right. Every now and again you pass through another tunnel before jumping back out onto the narrow path. Even though you are returning on the same trail, it is a much different experience when you are facing the other way as the backdrop will be entirely different. Even in different lighting conditions at a different time of day you can have an entirely unique experience. And trust me, we did!!

We stopped several times, mostly to rest, but my friend Derek got some unbelievable drone footage which you’ll see in the video. It was so dramatically stunning that I have now bought the same drone and will be using it for future footage!

This hike from Pico do Arieiro to Pico Ruivo is the most famous hike on the island of Madeira in Portugal. This tunnel-route leads hikers along narrow pathways, up and down ominous staircases, and through dark, wet and windy tunnel chambers. It is an adrenaline-filled test of endurance with steep inclines, causing some serious quad and calf burning on the trek and it was surely tough on my knees! I was icing them for 3 days after the hike, but it was so, so worth it! If you are up for the challenge, I promise you it will be the highlight of your trip to Madeira. I can honestly say it was the most epic thing I have done and experienced since living in Portugal now for seven months! Ciao, Ciao!!

If you are interested in the D7 residence visa process, here is some info that you may find useful…
Making the move to Lisbon, Portugal

Some of my videos